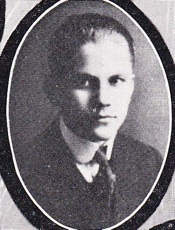 Robert Henry Leonard (Oct. 25, 1897 - Oct. 7, 1918) offered his services to the government on September 11, 1918, enlisting in the Navy. He was assigned to Company 137, Unit X, at the U.S. Naval Base, Hampton Roads, VA, where he was sent for training. Shortly after his arrival he was taken ill with influenza, followed by pneumonia. He died October 7, 1918, less than a month after his enlistment.

Robert Leonard came to Knoxville and was a student at the University of Tennessee. He was a member of the S.A.E. fraternity and resided at the fraternity house while in Knoxville. He is buried at Talbotton City Cemetery, Talbotton, Georgia.

The Georgia newspaper contained the following notice-
Robert H. Leonard, younger son of Mrs. Ella P. Leonard, passed away in Norfolk Monday morning, having been ill but a short while. Robert was a victim of Spanish Influenza. Robert volunteered for the U.S. Navy a few months ago and was stationed at Hampton Roads, Va. Robert was born and reared in Talbotton he spent most of his young life here he was unusually intelligent, and a most lovable character. Perhaps no young man who has been reared in the county had more friends than Robert he was held in the highest esteem by all who knew him, and a large circle of friends and relatives truly mourn his death. Robert had just reached his majority and he was a splendid specimen of manhood. His remains reached Talbotton this a.m. at 11 o’clock the funeral and interment took place from the train, and he rests in Oak Hill Cemetery. Rev. L.A. Brown conducted the funeral. Dr. Haywood J. Pierce, president of Prenau college, attended the funeral and paid a glowing tribute to Robert’s manhood and unselfishness. The floral offerings bespoke the high esteem and love of his many relatives and friends. All of the business houses in Talbotton closed in honor of his memory, and the funeral was largely attended. Surviving Robert are his mother, Mrs. Ella P. Leonard, one brother, J. T. Leonard and a large family connection.
-The Journal and Tribune, Knoxville, Tennessee, Sunday, October 20, 1918.