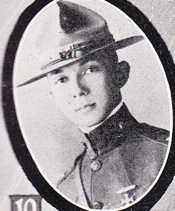 He left Knoxville in September 1917 as an officer of Company D, 117th Infantry. At Camp Sevier, SC, he became an aide-de-camp of Gen. W. S. Scott, and when the latter was succeeded by General Tyson in command of the 59th Brigade, Lieutenant Earle remained on staff duty. However, after reaching France he asked assignment to line duty and was ordered to Company M, 118th Infantry. Took part in all engagements up to October 5, 1918, when he was fatally wounded near Bellicourt. He died October 7 and is buried at Knoxville National Cemetery, Knoxville, Tennessee.

Lieut. Patrick Belmont N. Earl, of Company M, 118th Infantry was killed in action in France recently, according to unofficial information received by his parents, Mr. and Mrs. Jordon Earl, 114 East Park Avenue.The family of the deceased has wired Washington for the confirmation of his death. Lieut. Earl joined the Third Tennessee militia about two years ago and saw active service on the Mexican border. Later he was transferred to the 118th Infantry. He was a graduate of the Knoxville High School and at the time of his enlistment was a student of the University of Tennessee.
-The Journal and Tribune, Knoxville, Tennessee, Wednesday, November 13, 1918.