Gilbert Merrill Wilkinson (Jan. 16, 1887 – Oct. 14, 1918) was born in Chapel Hill, Missouri, but was raised in Lenapah, Oklahoma. He attended University of Tennessee’s School of Medicine in Memphis, graduating in 1915. He moved to Delaware and became a practicing physician in Nowata County. When the United States entered World War I, Wilkinson volunteered his medical services to the army. He served as a 1st Lieutenant in the 3rd Battalion Medical Reserve Corps stationed at Camp Greenleaf in Oglethorp, Georgia.  He died on October 14th, 1918 from pneumonia caused by the Spanish Influenza at the Red Cross Emergency Hospital in Memphis. 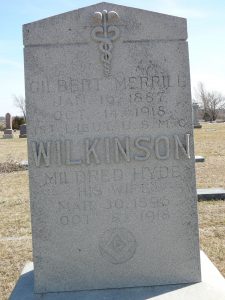