Frank Stanton Latham Jr. (July 2, 1891 – Aug. 21, 1918) was born in Memphis, TN. He attended the University of Tennessee and earned a degree in Law in 1912. After UT, he returned home to Memphis and worked for Union and Planters Bank and Trust Company.

In the summer of 1916, Latham enlisted as a Private in the Chickasaw Guards of the Old First Tennessee when trouble with Mexico seemed likely to spill over into war. He was stationed at Eagle Pass, Texas, achieving the rank of Corporal, until the United States entered World War I in 1917. His stellar performance in the Chickasaw Guards transferred him to the Army’s Department of Air Service in July 1917 as one of the very first American aviators trained for the war. He trained at the University of Illinois at Urbana-Champaign before being selected as one of only fifty to take special overseas training at a flight school in Foggia, Italy under the 8th Aviation Instruction Center. Latham’s skill as a pilot earned him the nickname “Lucky” Latham and he was commissioned as a 1st Lieutenant before being deployed to France.

Latham was stationed at the air field in Issoudun, France on  March 1918 and was assigned to  aerial combat, chase and pursuit. On the morning of August 21, 1918, Latham and his plane, “Nieuport,” suffered a malfunction after takeoff and crashed upon landing. He was returned home where Memphis newspapers report that over a thousand people attended his funeral. He is buried at Elmwood Cemetery in Memphis.

The following poem was dedicated by T.N. Buckingham to "Frank S. Latham of the Chickasaw Guards," October 29, 1920.

"The bugle deeds you back mere earthen shares you held in Yesterday,

That glorious, soaring Yesterday of Youth, when you were on the wing,

But binds repayment with fair Consolation's note to seal our debt

While we — poor we — who struggle on along the Mystery Trail,

Through sun and shadow mazes that the Fates have spun,

Know only that the Great Command long since reviewed your souls.

And seeing there just white and gold, has marked — 'Well Done!' ' 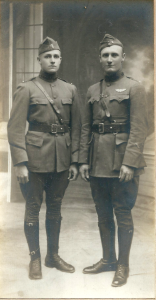 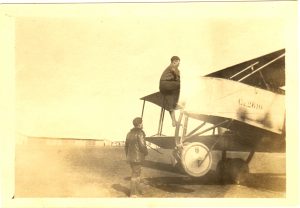 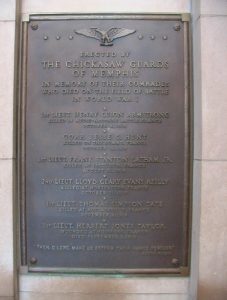 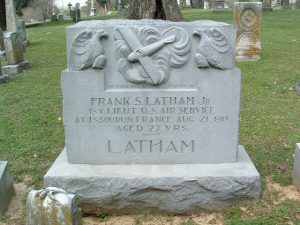