Edward Taylor Patton (Nov. 11, 1895 - Jan. 5, 1918) was born in Knoxville, TN, but spent most of his youth in Nashville, TN. Patton was studying agriculture as a student in the University of Tennessee's Class of 1920. He volunteered for the US Navy when World War I cut his studies short in 1917. He was at training in Norfolk, Virginia as an apprentice seaman when he fell ill and was admitted to the Naval Hospital. He passed away there from cerebrospinal fever, caused throughout World War I in servicemen by cramped conditions, on January 5., 1918. He is buried at Spring Hill Cemetery in Nashville, Tennessee. 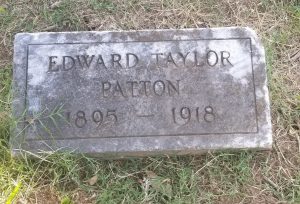