Daniel Christie Kingman Jr. (April 10, 1879 – Dec. 1, 1918) was born in West Point, New York. Kingman Jr attended the University of Tennessee for Electrical Engineering as part of the Class of 1903.

Enlisting on September 12, 1918, Daniel Christie Kingman Jr. joined the Army and served at the rank of Major under the 7th Guard Division of the District of Columbia. Before he was deployed, Daniel Kingman Jr. died of influenza while stationed in Washington D.C. He is buried nearby at the Rock Creek Cemetery, Washington D.C.

Daniel Christie Kingman Jr. was from a family dedicated to US military service. Daniel Christie Kingman, his father, was a Brigadier General and served as the Chief of the Army Corp of Engineers from 1913-1916. He is credited for building some of the earliest infrastructure projects when Yellowstone National Park was created, for which Kingman Pass is named after. In addition, he worked on waterway projects that ranged from the Panama Canal to the Tennessee River. Kingman Jr’s brother, John Jennings Kingman, also attained the rank of Brigadier General. He served as the Assistant Chief of the Army Corp of Engineers. Ralph Willcox Kingman, his eldest sibling, served as a Colonel in the United States Army. His youngest sibling, Fredrick Eustis Kingman, served in the United States Army with the rank of First Lieutenant. 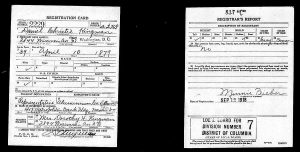 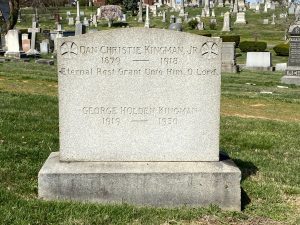