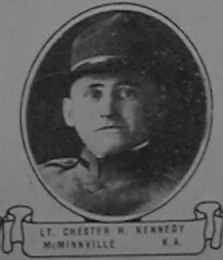 Chester Hinkley Kennedy (November 25, 1895- October 23, 1918) was born in McMinnville, Tennessee to father, Clarence Birdsall Kennedy and mother, Myra Bell Kennedy, nee Hinkley. He was the oldest of five siblings. He attended the University of Tennessee as part of the Class of 1918, but enlisted in the United States Army before graduating in 1917.

Kennedy trained as a Private at Fort Oglethorpe in Georgia. He completed Office Training School Fort Sill in Oklahoma where he was made Second Lieutenant on August, 15th, 1914. He departed from New Jersey on the ninth of July in 1918 to France where he would serve as a part of the Aviation Section, Signal Corps, the direct ancestor of the present day United States Air Force, running from the years of 1914 to 1918. In April of 1918, the First Aero Squadron organized as the 1st Corps Observation Group and became the first American unit to see action within France. Kennedy was a Second Lieutenant with the First Aero Squadron at the time of his death. The primary duties of the Observation squadron were to operate in advance of battle squadrons to track the movements of enemies, sometimes adjusting artillery fire. During this time, the First Aero Squadron was primarily based at the Remicourt Aerodrome airfield near the Marne frontlines in Northwestern France.

Chester Hinkley Kennedy was killed in action on the 23rd of October, 1918. There is little information on his death, but it is likely that he was killed between Fliery and Apremont in the Toul sector, the primary active operation area for the 1st Corps Observation group at the time. He is service is memorialized in the Meuse-Argonne American Cemetery in France.