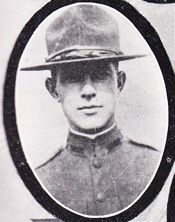 Carrick Heiskell Yeager (April 30, 1892 - Nov. 1, 1918) was the son of Alvin A. and Rowena Yeager. He was from Knoxville, TN and prior to enlisting in the US Army, Carrick Yeager was a Draftsman for Fulton & Company. He graduated from the University of Tennessee with the Class of 1914. He entered the Second Officers’ Training Camp, Fort Oglethorpe, GA, in August 1917 and received a commission as second lieutenant upon completing the three months’ course. Assigned to the 20th Machine Gun Battalion, 7th Division, 2nd Lt. Yeager sailed for France in July 1918. He was killed in action on November 1, 1918 from German small arms fire near Thiaucourt, France as the division was preparing for a final push on the Hindenburg Line. He was recommended for Distinguished Service Cross for his gallantry in battle. He is interred at C,28,15, St-Mihiel American Cemetery, Thiaucourt, France.