We invite you to join us next Tuesday for a fascinating lecture by a scholar of the role gender plays in partisan warfare and irregular conflicts, and the politics of memory concerning this topic. The lecture is free and open to the public. You are welcome to invite undergraduates from your classes to attend as well.

The talk by Prof. Budryte of Georgia Gwinnett College will take place next Tuesday, on March 8, at 3pm, in Hoskins, 2d Floor, in the seminar space outside the Center for the Study of War and Society.

The lecture is entitled  “From Masculine Heroism to Everyday Violence? A Gendered Perspective on the Partisan War in Lithuania”.

Studies of the roles played by women in war and their lived experiences challenge stereotypes of women as either silent victims or peacemakers during wars. Drawing on interviews conducted in Lithuania with women who participated in the Lithuanian war of resistance against the Soviet Union (1944-53), the presentation explores the relationship between public commemorations of this war and the ways in which it is remembered by the “ordinary” participants (partisan messengers). How are metanarratives about armed resistance constructed? Which lives and which stories get included in these political myths? By whom? Which stories are marginalized or even completely excluded?

Dovilė Budrytė is Professor of Political Science at Georgia Gwinnett College.  Her publications include articles about memory politics and three books: Taming Nationalism? Political Community Building in the Post–Soviet Baltic States (2005), Feminist Conversations: Women, Trauma and Empowerment in Post–Transitional Societies (co-edited with Lisa M. Vaughn and Natalya T. Riegg, 2009), and Memory and Trauma in International Relations: Theories, Cases and Debates (co-edited with Erica Resende, 2013). Her fellowships and awards include the National Endowment for the Humanities (NEH), Carnegie Council on Ethics and International Affairs (CCEIA), and the US Holocaust Memorial Museum. In 2014/15, she was the recipient of the University System of Georgia Excellence in Teaching Award.  One of her current research interests is women in partisan warfare, and her article on gendered dimensions of Lithuania’s partisan war is forthcoming in a special issue of the Journal of Baltic Studies. 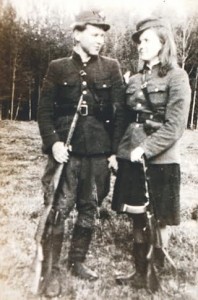